Martyrdom of the Apostles by Stefan Lochner 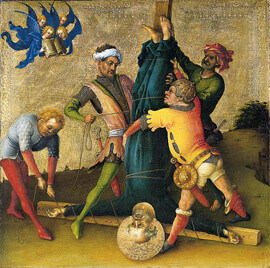 Year: 1400s
Medium: Tempra/oil on walnut
Description: On the exterior wings (each in a different museum now), the martyrdom of each of the 12 Apostles is depicted in 15" individual squares. Most notable perhaps are the martyrdoms of St. Andrew (crucified side-ways and giving a sermon as he died) and St. Bartholomew (a well-constructed male nude being flayed alive). All apostles have Jesus' countenance as they are murdered. Torturers resemble Jews or Muslims, most likely due to the fact that they were moving into Cologne at the time of the painting, the mid-1400s. There was a considerable cult of the Apostles in Cologne, where one of the city's Romanesque churches was dedicated to all twelve of them (the original eleven, plus St. Matthias, the replacement chosen for Judas Iscariot after the Crucifixion). By Stefan Lochner (German).

View all of the work in our Flemish art database attributed to Stefan Lochner.